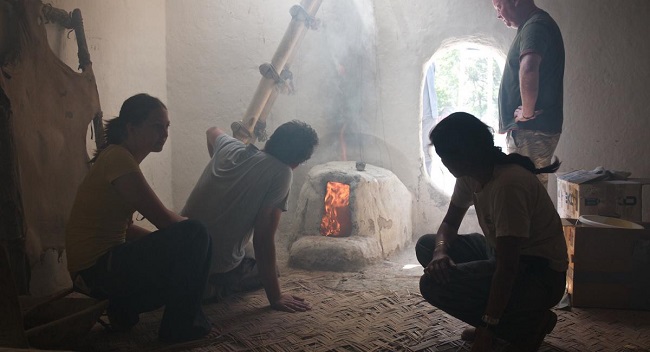 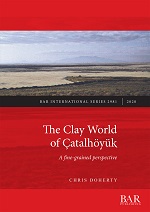 Chris Doherty’s study focuses on the role of clay in the development of Çatalhöyük, the famous and largest Neolithic settlement in the Konya Plain in central Anatolia. The author offers a holistic approach to understand the interrelationship between all clay materials used at the site and the landscape. Çatalhöyük lies on the clay-rich bed of the former Pleistocene Lake Konya, which lacked local sources of stone, and this makes its position interesting as clay plays a dual role here, i.e. as the main landscape component and a raw material for different types of material culture at the site. The book is divided into 10 chapters and is supported with many illustrative figures and tables.

In the first chapter, The clay world of Catalhoyuk, Doherty first introduces the questions regarding the need to study clay in the Neolithic and presents the analysed archaeological site and its regional context.

At Çatalhöyük, the community was clearly familiar with the use of clay from the earliest building levels, and could skilfully exploit clay for a wide variety of domestic and symbolic uses. A lot of the related issues have already been studied in detail, but Doherty attempts to combine this data and answer a series of questions on topics such as: How was clay used at the site? What were the resources and how did these change? What was the nature of the landscape around the site? What was the relationship between the material culture and landscape? Was the site successful due to its clays? The research also is framed by Tim Ingold’s term taskcape, i.e. a socially constricted space defined by related human activities (Ingold T. 1993. The Temporality of the Landscape. World Archaeology 25(2): 152–174), although Doherty proposes a new term and tries to work with a ‘clayscape’, i.e. a clay-oriented taskscape for Çatalhöyük.

In the second chapter, Clay-based material culture studies at Catalhoyuk: a review, the author presents us with a brief review of publications that relate to the four main aspects of living with clay at Çatalhöyük: materials (clay artefacts), the technology of production, the resources available, and the clay-rich landscape of the site. Here, details on artefacts and materials such as mudbricks, plaster, pottery, clay balls, geometric clay objects, stamp seals, and figurines are presented with information and results on studies that focused on these individual types, as well as with a comment on problems that arouse from them. Doherty sees the major problem with these studies in the fact that each of these materials was researched singularly, and the clay material culture was mostly interpreted without any consideration of the raw materials and their distribution in the landscape.

In the third chapter, titled The clay landscape of Catalhoyuk, the author presents the results of landscape studies at the site and focuses mostly on the multi-year KOPAL project and its results (e.g., Roberts N. et al. 1999. Chronology and stratigraphy of Late Quaternary sediments in the Konya Basin, Turkey: Results from the KOPAL Project. Quaternary Science Reviews 18(4–5): 611–630). The project proposed a view of Çatalhöyük and its surrounding that were in stark contrast to Mellaart’s (Mellaart J. 1967. Catal Hoyuk: a Neolithic town in Anatolia. McGraw- Hill) and Cohen’s (Cohen H. R. 1970. The palaeoecology of south central Anatolia at the end of the Pleistocene and the beginning of the Holocene. Anatolian Studies 20: 119–137) visions of the site as centred on a grass steppe. The KOPAL project envisioned an area filled with backswamps and river channels in the Neolithic, and a drier landscape only at the end of the Neolithic, with the nearest area suitable for agriculture more than 10km away from Çatalhöyük. These results prompted Ian Hodder (Hodder I. 2006. The Leopard’s Tale: Revealing the Mysteries of Catalhoyuk. Thames & Hudson. New York), the excavator of the more recent excavations, to suggest that the site was chosen for its availability to clay more than for its agriculture potential.

The KOPAL project results were mostly disproven with archaeobotanical, faunal and other biogenic studies, as well as from clay studies conducted in previous work by Doherty (Doherty C. 2013. Sourcing the Lower Alluvium) to re-interpret Çatalhöyük’s local environment and that of the Southern Konya Plain. The alluvial system proposed by the KOPAL project is inappropriate for this physiographic setting.

An alternative alluvial system is thus proposed which, together with an acknowledgment of changes due to soil formation, presents a truer picture of the landscape context for the Neolithic clay deposits.

Here a view emerges that the landscape around the site was much drier than that proposed by the KOPAL model, and brings the narrative back to the wellwatered grassland setting already proposed by Mellaart and Cohen.

In chapter six, The Holocene alluvium – a clay for all purposes, the Holocene alluvium, i.e. a silty calcareous clay, is explored in more detail. Special focus is put on early mudbricks vs. mudbricks in the later occupation phases. The alluvium was used initially as it was a readily available surface clay, and as such an attractive raw material. After the South M phase these dark alluvial clays were no longer used for mudbricks, and the conflict arising between the continued use of this material and its corresponding fertile soils is seen as the probable cause for the sudden abandonment of dark clay mubricks.

In chapter seven, A common ground: the white marls and lake clays of the Konya Plain, the white marls are explored in more detail. This material was used for the final plaster layers of floors and walls and has already been extensively studied, but the burnt lime plaster technology, an obvious PPNB connection, that was proposed for the earliest layers at Çatalhöyük is questioned here. Doherty presents firm evidence that burnt lime plaster was more labour intensive to produce and complicated to use compared to the readily available white marl (which is strikingly obvious from the comparison of the operational sequences of both processes in Figure 7.5).

Next a micro-textural analysis is presented that proves the use of softlime, found in weathered Neogene limestone outcrops west and southwest of the settlement, was present at Çatalhöyük from the formation of the site onwards. As such, there is no solid archaeological evidence for burnt lime technology at Çatalhöyük.

Additionally, non-white marls are also presented in this section of the book, and these became more important after the South M phase, with the author arguing that the diversity of clays around the site was more important than white marl availability alone, as argued by Hodder (2006).

Çatalhöyük’s Clays. In I. H. Hodder (ed.), Substantive technologies at Catalhoyuk: reports from the 2000–2008 seasons. Cotsen Institute of Archaeology Press: 51–66). These results suggest that Çatalhöyük was located in a landscape with localized wetlands, not in a continuous seasonal wetland with only a few dry areas.

The fourth chapter, Establishing the sequence of clay use, presents the clays identified by the artefact timelines to reconstruct the actual clay deposits that might have been present in Çatalhöyük’s landscape or have been brought from elsewhere. The main observed patterns of clay use include the use of alluvial dark clays in the earliest levels (i.e. Lower Alluvium in the KOPAL stratigraphy) for making mudbricks, and this then changes in the South M phase.

A similar observation can be made for mortars and plasters, clay balls, pottery, and geometric clay objects.

Only figurines were made from whatever clay was available at all occupation layers, while stamp seals show a lack of fabric variations and have a fixed composition.

Doherty also proposes using clay colour as a useful investigative approach as people at Çatalhöyük made full use of this in their material culture. Although colour is systematically recorded in excavation and post-excavation, it has not been interpreted in landscape terms (except in the KOPAL stratigraphy). Clay colour, as argued by Doherty, can provide the essential link between clay material culture, raw materials and landscape that allows clay use to be examined on all levels of engagement.

The author then presents the four fundamental clay groups identified at Neolithic Çatalhöyük, of which the first three are local materials (the dark alluvial clays, the white marls and the local calcareous red clays as a continuous sedimentary sequence, the colluvial clays), but the fourth is of non-local character (non-local non-calcareous red clays) and implies the transport of clays or finished artefacts. As these four groups also have different temporal ranges they provide the most logical framework for exploring life with clay at Çatalhöyük.

The following five chapters deal with these four clay groups and their interpretation in more detail.

Chapter eight, Colluvium: the rise of new clay, looks at a new clay source recognized at Çatalhöyük, i.e. the colluvium which is an unconsolidated earth material that has been transported down the tell by gravity and accumulates at its base. The composition of the colluvium is a direct reflection of the material brought onsite, as it is a mixture of degraded mudbricks, plaster and mortar. This type of material, as argued by Doherty, was not only the dominant clay for mudbrick building after the South M phase at Çatalhöyük, but also had beneficial effects on the local landscape. The concept of a clay cycle is proposed and explored in more detail, as the dynamic link between clay material culture and landscape was fully developed only with the colluvium phase.

The proposed ‘clay cycle’ explains most of the high volume clay transitions at Neolithic Çatalhöyük.

In the ninth chapter, Arrivals from a distant clayscape, the only non-local clays used at Çatalhöyük are presented. These were used only for a single group of artefacts, specifically the pottery that appeared at South M and which then dominated until the later levels. These clays are the only departure from a full reliance of the Çatalhöyük people on nearby local clays. This change corresponds to the first use of mineral-rich ‘gritty’ clays that were first recorded by Mellaart, but their non-local character was not appreciated until the Hodder excavations.

Doherty presents the pottery forms as well as the full fabric sequence, established after petrographical examination of thin sections. Here convincing results are presented as the mineral inclusions in gritty wares clearly point to the use of non-local noncalcareous raw materials, as these inclusions are not present in the local calcareous clays. However, it is not clear whether clay or readily made pottery was transported to Çatalhöyük.

The final chapter, Conclusions, brings together the main topics discussed in the book as well as all the results which provides a more holistic approach to the clay-based material culture at Çatalhöyük and its place in the context of the local landscape. Even more importantly, Doherty shows how the site’s favoured location on the Konya Plain afforded both raw materials and an environment suitable for early farming, against the view presented by the prevailing KOPAL landscape model. This change to the landscape model will of course have major implications on how all aspects of life at Çatalhöyük are seen, as rightly pointed out by the author.

The factors behind non-local clay use have not been clearly established by this research, as Doherty notes himself, and it is therefore not clear whether pottery made from gritty clays was appreciated because it fitted a new preferred style, or whether technological superiority was a factor – only further work will be able to fully interpret what this variation points to. Nevertheless, Doherty’s book is an interesting multidisciplinary view of clay, clay material culture, and landscape, as well as the different variations that bind them. The book would benefit from some more figures of higher quality, but apart from this it is a well-researched, well-documented, thought-provoking, and inspiring book for any researcher dealing with clay raw materials, pottery, and landscape studies.