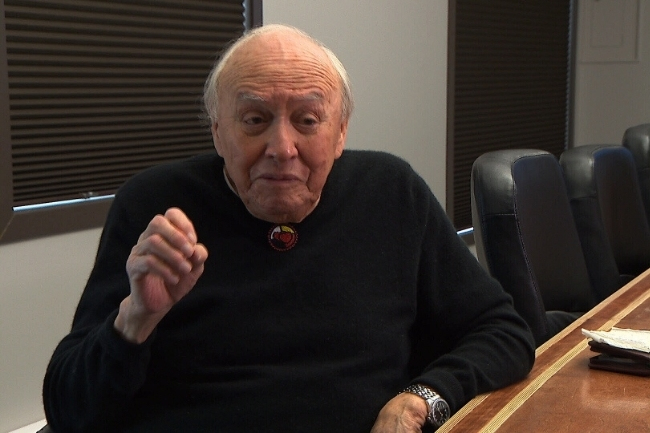 Did You See Us? asks readers to participate in a reunion amongst a sociologist, the Winnipeg community, and Survivors of the Assiniboia Indian Residential School. Operating between 1958 and 1973, this residential institution was different than the previous fifteen that existed in Manitoba, as it was both the first residential high school in the province and the first within an urban setting (Winnipeg). Administered by the Oblates of Mary Immaculate, the school existed as a place to offer high school education for students from remote communities. In this way, the school presented itself to be a typical urban high school, but the varied student perspectives acknowledged, “it was still a residential school” (16).

By the time survivors arrived at Assiniboia, they had experienced multiple residential schools under the direction of various religious denominations. Therefore, some students, including the late Theodore Fontaine, thought of the school as “a little oasis in a sea of turbulent seas” due to the higher quality of food and caring teachers who pushed them to do well both in academics and extracurriculars (29). The school day was still structured around prayers, a strict segregation of genders, and isolation from their home communities. However, in comparison to their former Indian day, residential, or public schooling experiences that happened before or after Assiniboia, the urban high school was remembered more fondly for many students. These recollections were in part due to the friendships that were made, additional extracurricular activities including dances, sports, community events, and the opportunity for many students to explore an urban area for the first time.

The physical book was created in conjunction with Survivors from The Assiniboia Residential School Legacy Group and Dr. Andrew Woolford, an experienced sociologist on this topic. As a settler scholar, Woolford’s name does not appear on the cover of the book and only appears after the Survivors’ stories in part 3. This act of centring the community’s history as an author demonstrates Woolford’s commitment to answering the title of the book, Did You See Us? We are forced to confront this story from the perspective of residential school survivors rather than an academic. Woolford’s chapter is followed by four additional parts, which recount stories from former staff, neighbours, the general Winnipeg community, and three separate reunions (2013, 2015, 2017).

Together, these distinct parts combine Indigenous community research, oral history, and archival analysis into an informative account of this understudied institution. The purpose of the book is to help survivors in “reclaiming our former school and its legacy” for healing and commemoration (xxiii). This was a twofold goal which included the creation of new spaces to share stories about the school while survivors were still alive, and at the same time educating the broader Winnipeg community about its legacy. In this manner, the story becomes a collection of multiple perspectives that reads more circular than linear. This works particularly well due to the incompleteness of the archival record and the varied experiences students remembered that was largely dependent on their previous schooling and in what decade they attended.

In the mid 1970s, when the school was being demolished, only a few students’ embroidery work was saved along with the 1958–59 class photograph. The book fills in those missing details when the physical building was reconstructed to fit the needs of a new RCMP forensic lab. Did You See Us? also included the perceptions of white students around the school, nearby neighbours, former staff, and the local Winnipeg community members who were actively engaged in the reunion. Woolford balances the varied perspectives of those both inside and outside the institution with the reality of the genocidal policies during this period. Did You See Us?, then, is not just a book, but a physical archive constructed through a particular context which included physical reunions, the sharing of historical posters, and the production of a peer-reviewed text. The book is larger than its physical presence as it represents a relational memory that was led by the local Indigenous community and translated into an academic text.

The book does present a historical conundrum when conducting research at a school reunion. As one survivor, Betty Ross, noted, “the residential school either made you or broke you” (9). As a result, we hear a lot from the students who were “made” in the school and nothing from the students who either passed away before the reunion or did not want to relive those memories with classmates (9). Woolford is blunt about these missing pieces: “They are an incomplete set of remembrances” in the sense that only some stories could have been possibly shared in 2017 (199).

However, these “incomplete” memories are better than no memories, and the book itself represents the most complete information. It also presents several troubling questions about the reality of educational integration efforts for Indigenous people in this period and the ongoing experience of Indigenous students who still attend high school far from their home communities.3 In a circular way, the former school building now houses the Canadian Centre for Child Protection, ensuring the memory and legacy of its former occupants are remembered. I would highly recommend this book for new settler scholars in Indigenous studies. Woolford is honest about his inexperience hosting survivor reunions and his reluctance to engage in work that only benefits academics rather than the Indigenous communities in their area. Woolford employs an “unsettling methodology” which supported the Assiniboia Survivors Legacy Group to own, control, access, and possess their histories, and is an excellent template for future Indigenous community-led research in education (198). The book will serve as an important archive of the Assiniboia Indian Residential School and represents an urban community’s reckoning with its colonial past.