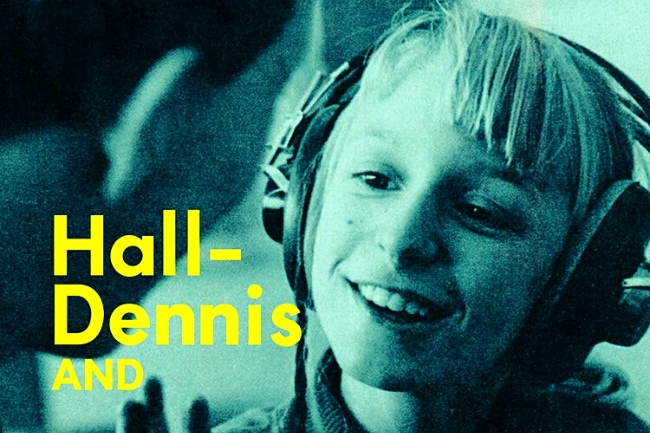 Detalhe de capa de Hall-Dennis and The Road to Utopia: Education and Modernity in Ontario

When you open Josh Cole’s book Hall-Dennis and The Road to Utopia you find a series of photos of children and teachers happily working in open concept classrooms, engaging with new postwar technology (TVs, headphones, tape machines), and running freely in fields. These photos are part of the 1968 Ontario education document Living and Learning: The Report of the Provincial Committee on Aims and Objectives of Education, also known as the Hall-Dennis Report. The images, along with the written report, suggest a new purpose for education, at the forefront of modernity, progress, and creativity. Cole argues these images were used to indicate schools were no longer “a place of confinement but instead a place of enjoyment,” now depicted as modern art galleries, highlighting “clean lines, bright lights and a modernistic sensibility” (185). However, Cole also suggests that the images, and much of the narrative in the report, were a veneer of openness and did not represent the real substance of the report, which was to maintain conservative libertarian positions on individualism and citizenship.

Cole has done considerable detailed research on the Hall-Dennis report, the politics of postwar Ontario, and the ways politicians used education as a tool for addressing the rising influence of youth counterculture. He argues that the Hall-Dennis merits close consideration, not just as a major document in Canadian education history, but as a lens into the public’s diverse response to enormous global structural change. Ontario Minister of Education William Davis commissioned the report in 1965, and it was completed in 1968, by co-chairs Emmett Hall and Lloyd Dennis and their commissioners. They saw education as a key vehicle in addressing postwar global economic developments in mass-production, consumption, and larger state involvement. The excitement over the limitless power of education is confirmed in the Ontario spending budgets: from 1960–1970, the budget increased significantly to $1.6 billion annually.

The book provides a scholarly examination of the lead up to the report, the committee work, outreach, and the 1960s changing perspectives and philosophies regarding modernity, as well as the ways the political left and right scuffled for power. The committee work “left no stone unturned and spared no expense” (5), spending almost $700,000 (in 1960s dollars) for travel to other countries to explore educational initiatives, listening to eighty-eight briefs, thirty expert presentations, and dozens of public hearings. Understanding the challenges of the time, Cole argues that the government used language in the report to address the demands of the left, in terms of a “child-centred learning continuum that invites learning by individual discovery and inquiry” (9) but maintained conservative libertarian positions on individualism and “autonomous” freedoms (52). Cole argues that this document, when placed within the social movements of the 1960s, clearly emerged out of the social upheavals and new social relations that reflected rapid global growth and consumerism into a “singular vision of contemporary education reform” (16). He suggests it provided a way for the government to appear to address social movement demands for an overhaul of state institutions, but the overall message was that individuals were responsible to ensure society not fall into anarchy or disorder.

In the eight chapters of this thoroughly researched and well-written book, the author carefully shows the reader the perspectives of a wide range of diverse experts and stakeholders. Cole notes that the committee was “by no means skittish about acknowledging that education must accommodate industry, or that it was itself one of Canada’s largest industries” (63). The core committee consisted of twenty-four Ontarians, who Cole argues brought a diversity of knowledge to their work. They believed that new education recommendations would create well-rounded and “truly” democratic citizens. The fundamental aim was the guarantee of the “right of every individual to have access to the learning experience best suited to his needs” (8).

The book begins by examining the initial public consultations that took place as a product of written briefs and public hearings and finds major themes of individualism, the whole child, the idea of equality of choice, nationalism, and global connections, which Cole explores throughout the book. A wide range of prominent experts were consulted, including O. J. Firestone, a professor of economics, who believed that a growing, competitive economy would benefit all. His beliefs were supported by several prominent education directors. World-famous communications and media master Marshall McLuhan was also consulted. His “the medium is the message” narrative allowed the committee to embrace the new electronic age and connections to the “global village” (109–112). Others such as Voice of Women (VOW) and Ontario Teachers’ Federation (OTF) focused on the needs of students to address a rapidly changing “world community” (51). Cole provides a deep analysis of each of the experts, and notes that some voices were diminished or omitted in the final report, including experts on Indigenous culture, history, and education. The committee work also conducted outreach to global communities, exploring practices in countries such as Sweden, Britain, and the Soviet Union.

The final few chapters of the book examine the strategies of the report and it is here that his argument comes most clearly into focus. The report failed in the end to provide a new and visionary kind of economic, demographic, or historical analysis of education; instead, it supported capitalist notions of progress and the potential of a modern industrialized society: greater mobility, increased communications, and increased buying power. It embraced a conservative vision, where a fast-modernizing economy is compelled to train technicians, scientists, planners, embracing urbanization with specializations in communications and automation. It presents a future in which citizens move from rural, small schools governed by local school boards, using “primitive” teaching methods, and on to a modern, streamlined, centralized, and highly bureaucratized system. This report set the stage for the amalgamation of school boards and greater centralized Ministry controls.

The book suggests that the Hall-Dennis committee used public consultations as an acknowledgement of government openness to incorporate democratic transformation. In the end, Cole argues, the committee’s “unbridled elitism” (75) ensured that the report maintained the acceptance of global capitalism within a liberal framework. Students would be supported to be what they wanted within this new world, but only by working within established systems rather than radically tearing them apart. As Cole writes, “Liberalism, romanticism, and utopia were tightly bound together in the zeitgeist that shaped Hall-Dennis” (188).

The report was a way to address concerns over a rapidly changing society. It aligns with Alvin Toffler’s Future Shock published two years after the report first came out (1970), which argued that people become overwhelmed when facing accelerated technical change.1 Hall-Dennis and The Road to Utopia provides historical insight into how rapid change created educational challenges. Cole notes that the Hall-Dennis report was an experiment in what might be possible, a moment when intellectuals, living within a liberal state, came together to address the challenges of modernity. It provides us today with an opportunity to reflect on the current perils and frigidity to an open and publicly supported education system.