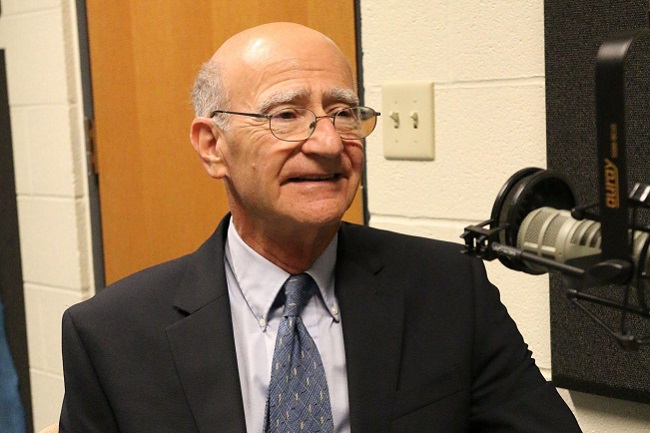 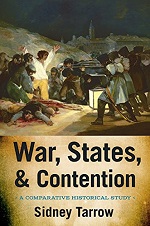 Sidney Tarrow is Maxwell Upson Emeritus Professor of Government and Visiting Professor of Law at Cornell University. He is the writer of numerous books, including The Language of Contention: Revolutions in Words, 1688–2012 and Strangers at the Gates: Movements and States in Contentious Politics. His book, War, States and Contention. A Comparative Historical Study, is a splendid and ground-breaking contribution to the comprehension of how war and states converge with contentious political issues.

Through a double accentuation on the structural foundations of war and dispute, from one perspective, and actor mobilization and repertories of contentious political issues from the other perspective, Sidney Tarrow addresses issues that lie at the heart of contemporary investigation on the restructuring of the state and on the obscuring of territories between internal and external politics. Beginning from the famous contention progressed by Charles Tilly that “states make war, war also makes states,” the book adds contentious politics to the equation. This adjunction provides further understandings of the relationship between states and war; contentious politics clarifies why and how states participate in wars, and the impacts of war on states. But the book additionally reveals insight into a second, less known equation of Tilly’s, which builds up a relationship between war and natives’ rights. Tarrow talks about how war prompts the employment of emergency measures that lessen rights, regardless of whether they are reinstated later. In other words, when a state rolls out war this involves changes in: the nature of internal contentious politics, the state’s reactions to conflict, and in state organization.

Tarrow examines these issues through a comparative historical study that uncovers how current structural changes in states, fighting, and types of contentious politics alter what we might see in the time of Western state-building. Drawing on these mechanisms connected to the formation and union of Western European states, Tarrow acknowledges two pivotal upturns. On the one hand, it puts contention between war and the state, considering both opposition from within national boundaries and from outside. Through this, he also studies the various forms through which domestic and international conflict stand in relation to each other. On the other hand, Tarrow updates these issues to the present in the analysis of the U.S. state and the War on Terror. He reveals how structural changes linked to globalisation and internationalisation alter the relationships between states, warfare, and forms of contention.

The author’s argument is built around a triptych—war, state, and contention—and bridges the gap between social movement studies, comparative historical sociology studies, and international relations. The relevance of this approach relies not only on placing three usually separate strands of literature in dialogue with one another, but also on the major results that the book offers. Powerful hypotheses for further research are provided. The present discussion engages with the book’s arguments on three intertwined topics, which constitute some of its major results: the relation between war and citizens’ rights; the transformation of the territoriality of war, states and contention; and the relation between war and the state. The inclusion of contention between war and rights reveals itself to be crucial for clarifying the relationship between the two. This is needed given that the issue seems not entirely solved by the historical sociology of the state, and is almost left unaddressed by research on contemporary wars and social movements. In this respect, one of the most striking results of the book is to reveal at what point the modern state is characterised by periods of restriction of citizens’ rights in wartime. In Tilly’s argument about war, states and rights, the relation between the three elements has a positive effect on rights. Because he looks at contentious politics, Tarrow demonstrates that the shrinkage of rights in times of war is a recurrent and understudied feature of the state as a specific political system. The advent of this “emergency script” is unveiled through a detailed historical account.

Chapters about U.S. politics after 9/11 shed light on a major transformation related to the use of legal instruments to modify the limits of the legally accepted boundaries of states’ interventions on bodies and limitations of individual liberties. The “rule by law” argument provides key understandings of how liberal democracies combine their foundational creeds with increasingly illiberal policies. Instead of despotic emergency rule, what is observed is a creeper process. Formally and procedurally, the U.S. state did not roll back liberal constitutionalism; however, in its content, the latter has been partially reshaped by the transformation of legally accepted boundaries on crucial issues such as the right to a fair trial or to individual integrity. In addition, both the increasing duration of wars and the undefined boundaries between times of war and peace have created a new hybrid status that seems to facilitate the perpetuation of these measures. By showing how the U.S. state deals with composite and long wars, and analyzing the interplay between contention, war, and states’ activities, Tarrow provides a critical contribution for the study of the blurred boundaries between domestic and international politics. The study of how international movements engage with states and vice versa sheds light on a major restructuring of the spatial dimension of power, while Tarrow also points out recurrent mechanisms of diffusion from policies for war to civilian policies.

In his book, Tarrow provides a stimulating perspective on the restructuring of state territoriality and its effects. In doing so, he echoes the questions raised by scholars who start from the idea that territoriality—bounded political authority—is a fundamental principle of modern political systems, and are interested in current processes of unbundling territoriality.

Sidney Tarrow’s investigation gives valuable insight in to the notion new territorialities in politics, and could engage more straightforwardly with these writers and with his own particular past contributions on these issues. Indeed, Tarrow has two fundamental arguments to make in this regard. This first is that he draws on the state-building literature, he indicates how the territorial restructuring of both war and contention influences the state, whose organization is as a matter of first importance territorial. Along these lines, Tarrow puts war back into the examination of state territorial restructuring. While most research sheds light on economics as a main thrust, contentious politics and composite wars additionally involve new types of state intervention and institutional arrangements. The second argument of Tarrow is that the unbundling of political power and rights are mutually related. The historical backdrop of the state and rights is a matter of territorial infiltration, confinement within boundaries, and the definition of the criteria that consider the privileges of political and social rights. A third set of comments highlights war and the transformation of the state in terms of power and bureaucracy. The preparation for war and the state of war opens up new opportunities for state authority in terms of the repression of opponents, as well as for the strengthening of both tax and repressive apparatus.

Tarrow’s main consequence for the U.S. state in relation to these issues is fascinating.

Indeed, there is an expansion of the structure of government; for example, the scope of the FBI and the Pentagon, as well as the multiplication of new agencies and joint-government organisations. Both the scope and the size of the U.S. state have expanded, despite a strong anti-state tradition. In the War on Terror, the contradiction between the expansion of the national security state and the anti-state movement has been somewhat resolved through increased outsourcing to private firms for the delivery of military and intelligence services.

This form of “government though contracts” allows for the preservation of existing budgets in the security sector, while increasing side-expenditure which is more difficult to track and control. The quick and poorly coordinated multiplication of contracts has created a much more intrusive U.S. state, but also a state more vulnerable to penetration from civil society and to regulatory capturing from firms. The writer conceptualizes this transformation of state power through Michael Mann’s distinction: there is in this manner a double extension of both the hierarchical and the infrastructural force of the U.S. state in connection to the War on Terror. This point, which is significant to the argument, is to a great degree stimulating.