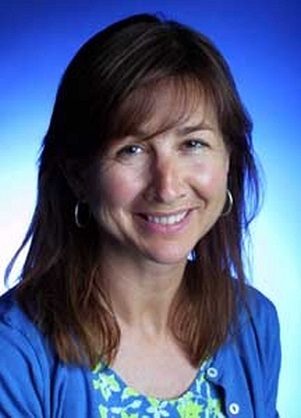 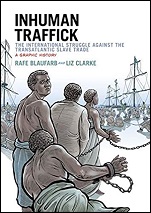 Fueled by the success of Trevor Getz’s award-winning Abina and the Important Men, Oxford University Press has signaled its commitment to the genre of “graphic history” by publishing six works in the series bearing that name. In Inhuman Traffick, the eminent French revolutionary and Atlantic historian, Rafe Blaufarb, teamed with the talented illustrator, Liz Clarke, to produce a remarkable example of how graphic history can engage students by combining the undeniable power of images as a form of storytelling with traditional components of a valuable pedagogical tool.

Inhuman Traffick revolves around the Neirsée incident in 1828-29, a complex tale hitherto unknown before Blaufarb’s skillful archival research. A slaving vessel of indeterminate nationality, the Neirsée was captured off the African coast as part of the British Navy’s suppression of the Atlantic slave trade. After retaking the ship, slavers sailed it to the Caribbean islands where they released Europeans at British Dominica and sold African passengers into slavery at French Guadeloupe. Because the latter group included not only the 280 survivors among the 309 original slaves but also several African Krumen (Royal Navy personnel) and Sierra Leoneans (British subjects), authorities in the UK demanded from French officials the freedom of its British African subjects. In return, the French objected to both British violation of French territory on Guadeloupe and the original confiscation of the Neirsée, which (falsely) flew under the French flag and was theoretically off limits to searches by British warships. Thus, the Neirsée incident precipitated a diplomatic imbroglio in 1829.

Although the incident resulted neither in war nor a bilateral antislaving breakthrough between France and Britain, Blaufarb’s essay and Clarke’s illustrations argue for the affair’s significance; Blaufarb contends compellingly that it “opens a panoramic view on the spatial, temporal, and human dimension of the Atlantic world in the early nineteenth century” (38). Spatially, Inhuman Traffick depicts the interconnectedness of the Atlantic world, as the Neirsée incident played out on the coast of Africa, in the American plantation complex, and in ministries in Paris and London. Temporally, the book sheds much light—in the graphic history section itself as well as the accompanying primary source collection—on the nature and problems of 19th-century communication when news travelled at the speed of sailing ships. The work is especially brilliant in capturing the “human dimension” of Atlantic history. Thanks to the effectiveness of visual images, Inhuman Traffick brings vividly to life issues ranging from the dangers of seafaring to the drama of the antislavery movement, from the horrors of the Middle Passage to the tragedy of enslavement. Readers will be moved if not sickened by the story of Sarah George. Despite frantic efforts of her husband, Thomas, and British authorities, this free woman from Sierra Leone was the only British subject never found and liberated after having been enslaved on Guadeloupe. Presumably, she shared the traumatic fate of the Neirsée’s 280 enslaved captives—and 10.7 million other humans. Literally and figuratively, Blaufarb and Clarke put a human face on the Atlantic commerce in flesh.

Inhuman Traffick constitutes an outstanding teaching tool on several levels. First, high school and college instructors might assign Parts I (“The Historical Context”) and II (“The Graphic History”) as an excellent means of introducing students to Atlantic history. Blaufarb’s concise yet rich contextual section offers an admirable précis of such themes as the Atlantic slave trade and abolitionism. The graphic history then re-presents various themes in a gripping combination of text and pictures: chapter 1 depicts international anti-slave trade efforts; chapter 2 covers the capture and retaking of the Neirsée; the third chapter follows the Middle Passage and the sale of Africans into slavery; a fourth chapter treats the international conflict; a final and unexpected chapter, “From Happening to History,” shows the actual process of document preservation and archival research that allowed Blaufarb to discover the Neirsée incident and recreate its history.

While providing a history of the Atlantic slave trade, Blaufarb simultaneously explains the process of doing history. Thus, on a second level, Inhuman Traffick will function as a welcome text in courses on historical methodology. The preface tells how the project came to fruition and how the authors collaborated to create approximately 300 “cells.” Part III contains 37 primary sources. After reading them, students can reflect back on the graphic history to assess how the authors transformed ship dispatches and diplomatic missives into a cohesive story. Part IV (“The Questions”) requires students not only to contemplate issues related to the content of Atlantic history but also to think about how history is written (and drawn). For example, the authors invite criticism of the “biases and weaknesses” of their script and images; in another place, Blaufarb challenges students to identify where “gaps and silences” in the primary sources necessitated his use of knowledge and imagination to make educated guesses.

Utterly compelling and visually stimulating, Inhuman Traffick is an impressive achievement that will convince any skeptic— including this reviewer—of the immense classroom potential of graphic history.